Speaking of "pure" mixers, the Kenwood KVL8300S Chef Titanium represents the best model fielded by Kenwood in its Chef line. If you are looking for a high-level planetary mixer, Kenwood KVL8300S will not disappoint you. But how much does this model cost? What are the features that make it the best in the Kenwood Chef range? What do buyers think? Read on for all the answers. 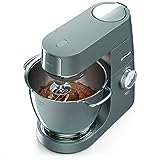 Kenwood KVL8300S Chef Titanium is a large planetary mixer, 36.5 cm high, 28.5 cm deep and 38 cm wide, with the bowl mounted. The bowl, in polished stainless steel, has a capacity of 6.7 liters, the largest of the Kenwood mixers. The machine weighs 10.4 kg, thanks to its brushed die-cast metal body, which gives it a minimal, modern and very attractive look. And this weight will serve everything, because this Kenwood mixer has a motor with a power of 1700 Watts, which can mix up to 2.56 Kg of dough for bread or pizza, up to 4.55 Kg of soft dough for cake, and whip up to 16 egg whites at a time. Amazing performance for a home planetary mixer. Even the standard equipment is top notch. In fact, in addition to the usual three hooks (the kneading hook, the balloon whisk and the flat beater), there is also the rubber whisk, suitable for doughs that can stick to the bowl, and the pastry spatula, which is used to mix some ingredients with others (for example, whipped egg whites) without losing the incorporated air, for soft and fragrant cakes and desserts. The splash guard cover and a comfortable spatula complete the equipment. But it does not end here: the speed is regulated electronically, and you go from one speed to another with a continuous increase and decrease, not jerky. Even when starting the engine, there is a low speed start function, also to avoid splashing outside the bowl. There is the pulse function, and the start / stop button. A real gem of this model is the lighting of the inside of the bowl, which will help you to see the dough during processing. The planetary mixer is also sold with a different code: Kenwood KVL8320S Chef Titanium, in a package that also includes the 1.6-liter Thermoresist blender. It may be worth buying this version with the blender, depending on the current offers.
Kenwood KVL8300S Chef Titanium

The list price of Kenwood KVL8300 Chef Titanium is justified by the fact that we are faced with a planetary mixer that has few rivals in the field of kitchen appliances. The quality of the materials, the richness of the equipment and the engine power explain the high price. The price, however, can also be considerably lower, especially in certain periods, thanks to the offers of Amazon and other online shops.

On Amazon, the opinions on Kenwood KVL8300 Chef Titanium are excellent. The mixer, in fact, collects an average result of 4.4 out of 5 stars, with the 5-star reviews representing about 75% of the total, and even it reaches 90% considering also the 4-star ones. We are therefore not wasting time with the positive aspects, which we have already listed in our review. Let's see instead what defects have been found. Almost all of the very few negative reviews refer to products that have arrived ruined or with inappropriate packaging. In this case, instead of leaving a few stars to the product, it is good to ask for the exchange or return to Amazon, which is possible in the 30 days following receipt. The same applies to a defective product: if it has a defect immediately, it is better to have it changed, or to return it, ask for a refund, and possibly buy it again later, rather than availing of the guarantee. Remember that, by law, in distance selling, you have 14 days to withdraw from the purchase. The only note that we found in the reviews is from a user who says it is difficult to mix the bottom, and also notes a loss of glaze in the bottom. However, the problem is not with the product. The whips of the Kenwood KVL8300 Chef Titanium, with the exception of the kneading hook, must in fact be adjusted, as stated in the instruction manual. Thus, one of the user's ones was too short, and the other too long, causing the two problems mentioned.

If you are not satisfied with anything below the top of the range model, Kenwood KVL8300S Chef Titanium could really be the right product for you. It is in fact a powerful and technological mixer, suitable for home use but also semi-professional, thanks to its ability to manage even large doughs. A great help in the kitchen, thanks to its complete equipment but also to the numerous accessories that make it expandable. Also to be considered is the purchase of the KVL8320S version, which includes the blender accessory, depending on the current offers.
Kenwood KVL8300S Chef Titanium

If you don't like this model, you can still read our selection guide and find the best stand mixer for your needs.

On this website we use first or third-party tools that store small files (<i>cookie</i>) on your device. Cookies are normally used to allow the site to run properly (<i>technical cookies</i>), to generate navigation usage reports (<i>statistics cookies</i>) and to suitable advertise our services/products (<i>profiling cookies</i>). We can directly use technical cookies, but <u>you have the right to choose whether or not to enable statistical and profiling cookies</u>. <b>Enabling these cookies, you help us to offer you a better experience</b>.